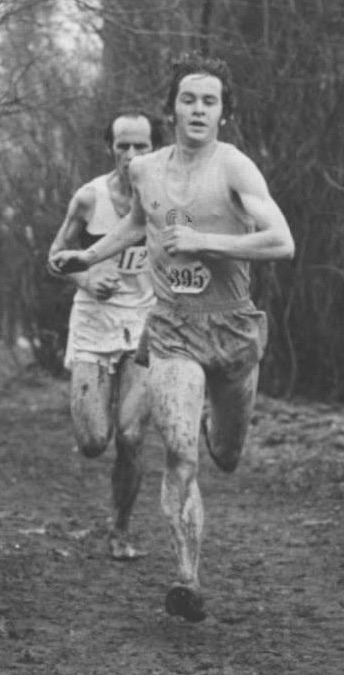 For a man who had only dabbled in the sport in secondary school, university and again during a spell at a seminary, ginger-haired Tommy Brennan, sporting the bright yellow singlet of the newly formed Liffey Valley Club in Dublin, showed all the signs of one possessed with great hunger for success when winning the Irish National B.L.E. Senior Cross Country Championship at Belfield, yesterday in 36 minutes 59 seconds.

Defending champion, Donal Walsh (Leevale) was second, Dessie McGann (Civil Service) third and Tom O’Riordan (Donore) fourth at the end of a punishing seven and a half miles test of stamina over the twisting U.C.D. circuit.

The most extraordinary fact about 24-year-old Brennan’s exciting victory is that this was his first success in any type of open competition, but as he explained himself afterwards: “I’ve only been training seriously for the past 10 months, or so, and a few promising runs along the way kept me going.”

This was one of the most open championship races in years and the only sure fact seemed to be that Donore Harriers would reign supreme for another season as National Club champions.

They achieved this target with an aggregate of 43 points and while this was their second highest total in B.L.E. competition they comfortably from the surprise packets from the west, Galway City Harriers, with the winners being led home by Tom O’Riordan who gained his 11th Championship medal but will not know until today if he has gained one of the four vacancies left on the Irish team for the International Championship, in Rabat next month.

Brennan, one of a family of 10 (six brothers and four sisters) and a younger brother of former League of Ireland soccer player, Fran Brennan, who also received a cap for Ireland, achieved his outstanding success yesterday through a combination of positive action, aggression, and, finally, stout hearted determination.

When the field broke up after the initial breakaway O’Riordan and Danny McDaid, the lanky Letterkenny postman shared the lead and the pair were shoulder to shoulder at the end of the first of the five laps. But the O’Riordan began to increase the tempo even more and his only “taker” was strong running Brennan, his action perhaps a little laboured, but deceptively strong.

Then entering the third circuit through a soft muddy 70 meter section Brennan eased, reluctantly he said afterwards, into the lead. O’Riordan held him for the next mile or so but the pressure was too much and with two laps remaining Brennan was on his way to gaining his club’s first National senior title.

McGann overtook O’Riordan but never threatened Brennan who eventually had to worry about Walsh’s determined late bid and for a while it looked as if the 26-year-old Corkman would bring it off for the third time.

Brennan, however, was running strongly at the end and his time beat by 29 seconds the course record set by Tony O’Brien (already selected for Rabat) when winning the Dublin Championship, with Walsh just four seconds adrift in second place and McGann a further six seconds back while just 21 seconds, the closest finish of all the B.L.E. Championships, covered the first four finishers.

O’Riordain received all the necessary support from his colleagues running strongly behind, for Donore to win their 16th senior title on the trot, a magnificent achievement.